As promised when the Archdiocese of Detroit unveiled its disastrously and comically redesigned coat of arms the Archbishop has had his own coat of arms redesigned both to impale his personal arms with the new coat of arms of the See and to have a rendering in the same artistic style. 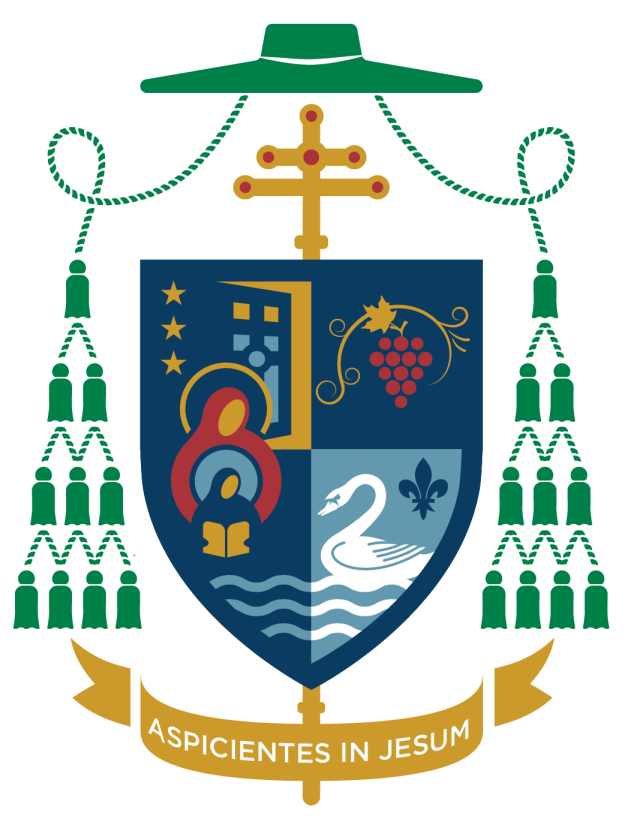 His coat of arms as Archbishop of Boston (above)

On November 29 the Most Rev. Edward Weisenburger (56), since 2012 the Bishop of Salina, Kansas, was installed as the Eighth Bishop of Tuscon, Arizona. When he was ordained a bishop in 2012 he assumed a coat of arms that was designed by J.C. Noonan and marshaled to the See of Salina. Once again Mr. Noonan has worked on Bishop Weisenburger’s current coat of arms:

Overall, a very pleasing design and nicely rendered by the artist who is Mr. Noonan’s regular collaborator.

However, the bishop, whether on his own or advised by Mr. Noonan has made the classic mistake of thinking that he is free simply to change the design of his arms on a whim simply because he is taking up a new position. Worse, the changes in the design are justified as harmonizing better with the arms of the See. That is a very poor justification for large scale changes to the design of personal arms, especially when one considers that while it is a long standing custom in the Church in the United States for diocesan bishops to impale their personal arms with those of the See it is not, by any means, a requirement. A good heraldic designer would know that if a man’s personal arms do not harmonize well with the arms of a See then it is, perhaps, a better design decision and a better heraldic decision for the bishop to refrain from marshaling his own arms with the diocesan arms.

As I said in my previous post about the arms of Bishop Siegel of Evansville, this is why it is important to settle on a good design at the time arms are assumed. You CANNOT change them later on a whim! Your coat of arms identifies you. Moving to a new assignment doesn’t change your identity.

The coat of arms originally assumed by Bishop Weisenburger was:

The charge of the Lamb of God is still prominent but has been moved from the main charge to being in a secondary position on the chief. For some reason the garbs have been eliminated. In the description provided of the arms in 2012 it said they represented the Eucharist and also, “Kansas wheat”. I suppose the thinking was to eliminate them since he no longer would be living in Kansas. But, as symbols of the Eucharist they are still justified in the design. Not to mention that as a part of his coat of arms for five years already they are part of his personal identifying mark.

Now the arrowhead has become the main charge and a star has been introduced. This effectively makes this an entirely new coat of arms.

The new description justifies all this in the following manner:

“The base of the bishop’s personal shield is worked entirely in gold—the color in Catholic heraldry representing the purity of the Triune God, Divinity and truth.  Upon this gold field appears a large stone arrowhead, depicted here as those that may be found in archeological dig sites within the Tucson diocese’s borders. An arrowhead presented in the downward position is a heraldic sign of peace. Moreover, the arrowhead is worked in red, borrowing this color from the Tucson diocesan arms as a particular tribute to his new see. Red also represents the blood of the pierced heart of Saint Augustine, an homage to the patron saint of Tucson’s Cathedral.  The arrowhead serves as a secondary homage to Oklahoma, the bishop’s home state and home archdiocese. Upon the arrowhead sits the six-pointed star of the Blessed Virgin Mary in her title of Our Lady of Perpetual Help, a secondary homage to the Diocese of Salina, which honors the Blessed Mother as their patron saint under this particular title.”

Now, all that sounds very nice and is probably appealing to many people. The problem is that it expresses very well everything that is wrong with this bishop’s new coat of arms. It falls right into the trap of thinking that his arms is his pictorial CV with it’s introduction of a new charge as an homage to his former diocese and the references to tincture changes to allude to the diocese of Tucson. Instead, the bishop’s original arms (with the blue field) “says” Edward Weisenburger. That gets “married” to Tucson since he is its new bishop and the arms are impaled to represent that “marriage”. That’s it; full stop. There is nothing more to be said, or done or, worse yet, re-done.

It is genuinely a shame that, with all of the best of intentions as well as what is, I’m sure, a real desire to create something unique, so many bishops get it so very, very WRONG!

On December 15, 2017 the Most Rev. Joseph M. Siegel (54), Auxiliary Bishop of Joliet, Illinois will be installed as the sixth Bishop of Evansville, Indiana. His coat of arms is:

Bishop Siegel of Evansville has correctly impaled his own personal arms, assumed when he was first made a bishop, with those of the See of Evansville. His is a pretty standard type of arms assumed by many American bishops. There’s nothing particularly bad about the design, except for that tendency, in which he is hardly alone among American bishops, to use what is often jokingly referred to as the “lucky charms” style of heraldry. That is, it includes too many charges attempting to represent too many things. Time and again I remind bishops that their coat of arms is not their CV in pictures. Time and again they adopt designs that attempt to do just that. Bishop Siegel’s coat of arms isn’t bad; it just isn’t very good either. There is a lack of coherency to the design.

Bravo to him, however, that in being translated from Auxiliary of one diocese to Ordinary of another the only change is to impale his personal arms with those of the See. He made no changes to his personal arms and did not see his translation to a new See as an opportunity to change his personal arms. This is, as readers of this blog will know by now, a pet peeve of mine and a problem which is occurring with increasing frequency. Too many bishops, advised by self-proclaimed “experts”, are tweaking, slightly changing or even entirely redesigning their coats of arms when they move from one diocese to another. This is why it is important to settle on a good design at the time arms are assumed. You CANNOT change them later on a whim! Your coat of arms identifies you. Moving to a new assignment doesn’t change your identity.

I also find it unfortunate that the arms of the See of Evansville continues to be depicted with a chief that is too narrow. The standard in heraldry is that a chief should occupy the upper one third of the field.

On December 19 the Most Rev. Thanh Thai Nguyen, 64, a priest of the Diocese of St. Augustine, Florida will be ordained the Titular Bishop of Acalissus and Auxiliary Bishop of Orange, California.

His coat of arms, designed by J.C. Noonan is:

This is a pretty typical design from what we have come to see from Mr. Noonan. As usual, he insists on personalizing the external ornaments by added symbols to the episcopal cross which, strictly speaking, should not and may not be done. The blazon of a coat of arms (its written description which describes the elements unique to that coat of arms and so, contains the essence of that particular coat of arms) concerns only that which appears on the shield. The external ornaments are enumerated in Roman Catholic heraldic custom but they are generic, not specific. In addition, for some reason the ribbon for the neck badge of the Equestrian Order of the Holy Sepulchre has been depicted here as brown. It should be black.

The wavy lines, lambs and lily in chief are a reference to the importance of waters in the bishop-elect’s personal journey, the 23rd Psalm and St. Joseph. The pelican in her piety is symbolic of the Eucharist and the arch of stars a reference to Our Lady under the title of Our Lady of La Vang.