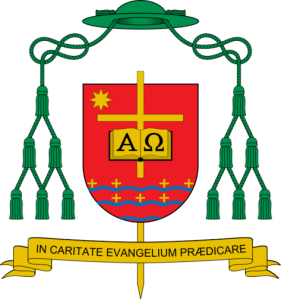 Above is the coat of arms of Jan Piotrowski who will be installed on November 29 as the Bishop of Kielce, Poland. The bishop’s arms contain perfectly good charges and are arranged nicely with good composition with one exception. The episcopal cross (often mistakenly thought of as a processional cross) which is the one external ornament that indicates the arms belong to a bishop, since other prelates may use the green galero with 12 tassels, is depicted as passing in front of the shield and piercing it with the bottom of the cross protruding from behind the shield. It is as if the cross is depicted as both a charge on the field and an external ornament at the same time. This is most incorrect. Charges must never extend beyond the edges of the shield; external ornaments should not be placed in a position to obscure any of the shield; objects cannot be depicted as piercing the shield; external ornaments are to be just that: external to the shield. I’m sure the person who designed this and/or depicted it thought he was being very clever and innovative. Instead, it’s just wrong. EPIC FAIL.

The other day I neglected to make note of the anniversary of the death of Reginald Cardinal Pole, Archbishop of Canterbury and a man with a better claim to the English throne than the illegitimate Elizabeth I. His impressive coat of arms depicts: Quarterly of eight: 1. Quarterly France (modern) and England with a label of three points each charged with a canton Gules (Clarence); 2. Per pale Or and Sable a saltire engrailed counterchanged (Pole); 3. Gules a saltire Argent with a label of three points goony Argent and Azure (neville); 4. Gules a fess between six cross cross lets Or (Beauchamp); 5. Chequy Or and Azure a chevron ermine (Newburgh); 6. Argent three fusels in fess Gules (Montague); 7. Or an eagle displayed Vert armed and beaked Gules (Monthermer); 8. Quarterly i and iv Or three chevrons Gules (Clare); ii and iii Quarterly Argent and Gules, a fret Or, overall a bend Sable (Despencer). The two crosses indicate his archiepiscopal and legantine powers. On the small shields are the arms of the See of Canterbury and the Cathedral Chapter. The image is of the achievement of his arms hanging above his tomb. 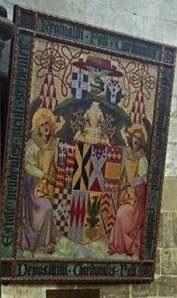 With the recent installation of the IX archbishop of Sydney Australia, The Most Rev. Anthony Fisher, OP several have asked about the arms of the other archbishops, five of whom have also been cardinals. Here they are: 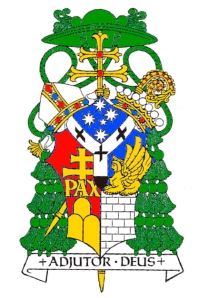 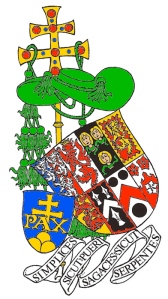 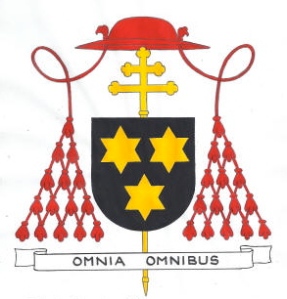 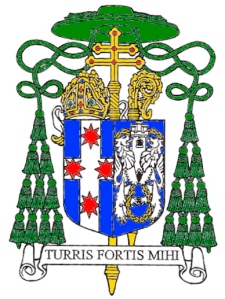 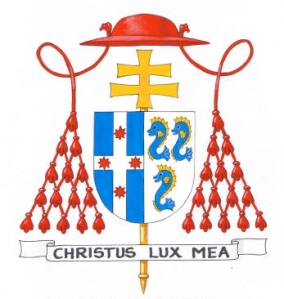 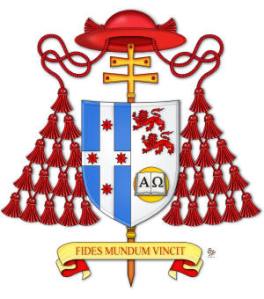 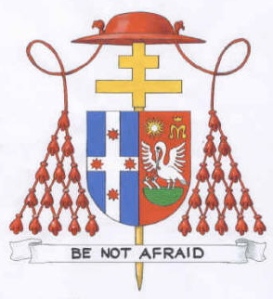 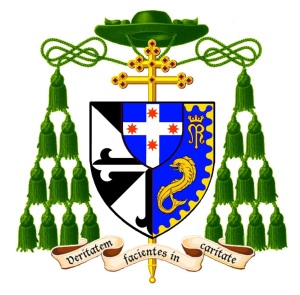 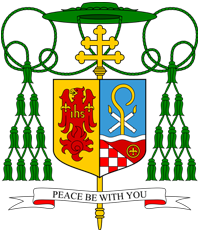 Since these have been so well received I thought I would share some more of my favorites from among those Cardinals of the Holy Roman Church who were from well known armigerous and noble aristocratic families.

First we see the arms of Johann Theodor Cardinal Wittelsbach von Bayern, Cardinal Priest of S. Lorenzo in Panisperna. He was created cardinal “in pectore” in 1743 and proclaimed in 1746. He was also Prince-Bishop of Liège, Friesing & Regensburg. The arms are:

Quarterly of six; 1 (Friesing) Or a moor’s head Sable couped at the neck crowned and collared Gules, 2 (Regensburg) Gules a bend Argent, 3 to 6  (Liège) Gules a column Argent, Gules a fess Argent, Argent three lions rampant vert, Barry Or and Gules a point in point Or three hunting horns Azure; Overall on an escutcheon Bavaria (fussily in bend Argent and Azure) quartering Palatinate (Sable a lion rampant Or). The supporters are two lions Or. 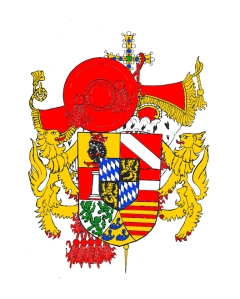 Next are the arms of Luis Antonio Jaime de Borbón y Farnesio, de Baviera y d’Este who was born the youngest son of King Philip V, King of Spain, and his second wife, Elizabeth Farnese. While barely eight years of age, Luis was created 699th Knight of the Order of the Golden Fleece in 1735 and ordained Archbishop of Toledo and Primate of Spain on 9 September 1735, and subsequently named Cardinal Deacon of the Title of the church of Santa Maria della Scala in Rome on 19 December. On 18 December 1754 he abandoned the ecclesiastical life for lack of vocation, renounced his ecclesiastical titles and dignities and assumed the title of 13th Conde de Chinchón granted by his brother Infante Felipe.

When his older half-brother King Ferdinand VI died without issue in 1759, Luis claimed the throne on the grounds that, he was the only surviving son of Philip V who was born in Spain, and the only one still residing in Spain (his older brothers were Charles, King of Naples and Sicily, and Philip, Duke of Parma, both reigning in Italy). However valid his claim, Luis lost the succession to his oldest brother Charles, while Charles’ third son became Ferdinand I of the Two Sicilies.

The arms are: Quarterly 1: (Castile) Gules a triple towered castle Or quartering (Leon) Argent a lion rampant Purpure; 2: (Argaon) Or five pallets Gules impaling (Sicily) Per saltire Aragon and Argent two eagles in fess displayed Sable; a point in point between the two quarters of (Granada) Argent a pomegranate Proper; 3: Per fess (Austria) Gules a fess Argent and (Burgundy  ancient) bendy Or and Azure, a border Gules; 4: Per fess (Burgundy modern) Azure, semeé de lis Or, a border compony Argent and Gules and (Brabant) Sable a lion rampant Or; two inescutcheon in pale the first (Bourbon) Azure three fleurs-de-lis Or, a bordure Gules; the second tierces in pale (Visconti) Argent a viper vorant Azure crowned Or and devouring a child Gules; (Flanders) Or a lion rampant Sable membered Gules, And (Tyrol) Argent, an eagle displayed Gules. 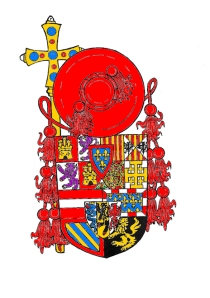 This cardinal, because of his failed claim to the throne, could also be numbered among the “royal” cardinals as well.

(artwork by the late Michael McCarthy)

Back in October of last year I posted about a Cardinal who was also the King of Portugal. He wasn’t alone in the College of Cardinals. In addition to numerous noblemen there have been other royal Cardinals as well. Below we see two more.

Casimir of Poland who was named a cardinal in 1646 but resigned from the College of Cardinals in 1648 to assume the throne as Jan II Casimir, King of Poland. His arms depict what was then the arms of Poland, namely:

Quarterly 1&4 Gules, an eagle displayed Argent membered and armed Or; 2&3 Gules a knight on horseback (Vytautas) Argent saddled Azure holding a shield Azure charged with a double-barred cross Or. Overall an escutcheon bearing Sweden: A cross patteé throughout Or between 1&4 Azure three crowns Or; 2&3 bendy sinister Argent an Azure overall a lion rampant Or; on an escutcheon in pretense per bend wise Azure, Argent, Gules all charged a Vasa Or. 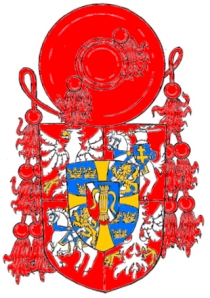 Next is the possibly familiar arms of Henry Cardinal Stuart, acknowledged by many to be the legitimate heir to the English crown as Henry IX. Henry Benedict Mary Clement Stuart was the Duke of York as well as the Cardinal Priest of S. Maria in Portico. He was later made Bishop of Frascati, Bishop of Ostia & Velletri in 1803. He died in 1807 never having taken his rightful place on the throne of Great Britain & Ireland. His arms were the royal arms of the Stuarts, namely:

Quarterly 1&4 Grand Quarters (England & France) 1&4 Azure three fleur-de-lis Or and 2&3 Gules three lions passant guardant Or; 2 (Scotland) Or a lion rampant Gules armed Azure within a double treasure flory counter flory Gules; 3 (Ireland) Azure a harp Or. The arms are supported by the lion of England and the unicorn of Scotland, royal supporters since the time of James I. The arms usually depicts the cadence mark of a silver crescent at the center but this was omitted after he assumed the title Henry IX as Pretender to the throne. This version also include the royal crown rather than a ducal coronet. 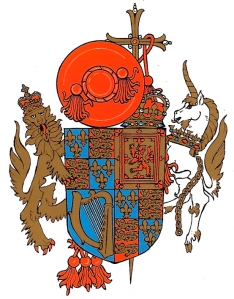 (all artwork by the late Michael McCarthy)